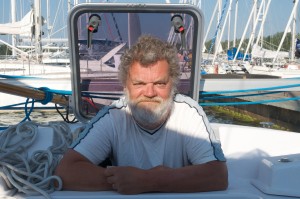 I have been involved with industrial electronics since the late seventies, a lot of analogue and digital (but very little software, if any, although I still remember that LDIR is opcode EDB0 in Z80 assembler…). But the major part of the work has been and probably will be documentation, tons of documentation…

For if money makes the world go round, the driving force to get design and production go round is documents, lots of documents.

Most of the work the last 20 years has been around marine navigation electronics, I held the position as Technical Manager at Consilium Navigation in Stockholm 1991 to 2001 and that may be one of the reasons behind the maritime approach.

This means that I also have considerable experience from the tightly regulated marine type approval side of things. For anything intended to be on a ship, this has to go hand-in-hand with the design process.

I have also followed my father’s footsteps and spent some time with journalism, worked a few years with Swedish Yachting Magazine “Praktiskt Båtägande” and currently with “På Kryss”.

Another reason for my marine electronics focus is probably that I have been yachting since late sixties. I currently sail a Corsair 28, a trailerable trimaran designed by Ian Farrier.

Just drop me a line and we’ll discuss whatever the problem is out there.